The Youth Friendly and Resource Centre invites all Staff and Students including the University Community for World AIDS Day Celebration. 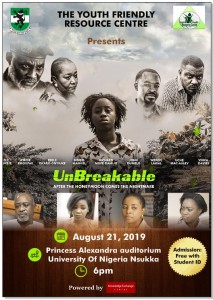 All Application should be addressed to:

Applicants are required to send their application letter to the address above or before 19th of July, 2019. The date of the Screening exercise would be communicated through the University website, visit the website for updates. For more enquiries, please call the following numbers: 08037221864 or 08160562120. For more details about the centre, please visit below link: http://www.unn.edu.ng/academics/centres/youth-friendly-resource-centre/ 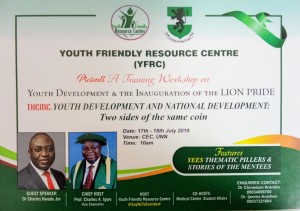 By resolution 42/112 of 7 December 1987, the General Assembly decided to observe 26 June as the International Day against Drug Abuse and Illicit Trafficking as an expression of its determination to strengthen action and cooperation to achieve the goal of an international society free of drug abuse.

Supported each year by individuals, communities and various organizations all over the world, this global observance aims to raise awareness of the major problem that illicit drugs represent to society.

Building on the success of last year, the theme for 2017 is: “Listen first – listening to children and youth is the first step to help them grow healthy and safe.” It is an initiative to increase support for prevention of drug use that is based on science and is thus an effective investment in the well-being of children and youth, their families and their communities.

The UN General Assembly held a Special Session (UNGASS) on drugs in April 2016. This Special Session marked an important milestone in achieving the goals set in the policy document of 2009 “Political Declaration and Plan of Action on International Cooperation towards an Integrated and Balanced Strategy to Counter the World Drug Problem”, which defined action to be taken by Member States as well as goals to be achieved by 2019.

Statement of the Executive Director on the International Day against Drug Abuse and Illicit Trafficking, 26 June 2017

The International Day against Drug Abuse and Illicit Trafficking recognises the severe impact that illicit drugs have on health, development, peace and security. Around 190,000 people die due to illicit drugs every year. But the damage visited upon lives and communities does not stop there. Drug use damages health in the form of debilitating HIV, hepatitis and tuberculosis, while drug trafficking nourishes money laundering, and deadly terrorism. Corruption, the great enabler of organized crime, exists throughout the drug supply chain.

In a collective response to these challenges, last year, countries unanimously agreed on an outcome document of the UN General Assembly Special Session containing over 100 recommendations to counter the world drug problem. These recommendations, forged by international consensus, stress the need for affordable science-based treatment and care, especially in prisons and for measures reducing the spread of HIV and other infections.

The recently released World Drug Report 2017 examines another worrying phenomenon: the nexus between drugs, crime and terrorism and reveals a shifting pattern of relationships. To use just one example, terrorists and non-state armed groups profit from the drug trade. By some estimates, up to 85 per cent of opium cultivation in Afghanistan occurs in Taliban-influenced territory. As new threats appear, including spreading methamphetamine and new psychoactive substances, old ones continue to thrive. Business models are evolving too, with cybercrime and the darknet increasingly playing a role.

Once viewed as a marginal actor on the development stage, drugs and crime are now viewed as a disturbing obstruction to the achievement of the 2030 Agenda for Sustainable Development, particularly Goals 3 on health and Goal 16 on peaceful societies. Our response is to work closely with partners to prevent drugs and crime not simply profiting from, but also fuelling, the instability that undermines development, peace, and human rights.

UNODC, on this day, remains committed to peacefully and effectively addressing the challenge of illicit drugs based on the international drug control conventions, and their key principle of protecting the health and welfare of humankind.

What can you do? Give blood. Give now. Give often

Every year, on 14 June, countries around the world celebrate World Blood Donor Day (WBDD). The event, established in 2004, serves to raise awareness of the need for safe blood and blood products and to thank blood donors for their life-saving gifts of blood.

Blood is an important resource, both for planned treatments and urgent interventions. It can help patients suffering from life-threatening conditions live longer and with a higher quality of life, and supports complex medical and surgical procedures. Blood is also vital for treating the wounded during emergencies of all kinds (natural disasters, accidents, armed conflicts, etc.) and has an essential, life-saving role in maternal and peri-natal care.

A blood service that gives patients access to safe blood and blood products in sufficient quantity is a key component of an effective health system. Ensuring safe and sufficient blood supplies requires the development of a nationally coordinated blood transfusion service based on voluntary non-remunerated blood donations. However, in many countries, blood services face the challenge of making sufficient blood available, while also ensuring its quality and safety.

Focus of this year’s campaign

The lives and health of millions of people are affected by emergencies every year. In the last decade, disasters have caused more than 1 million deaths, with more than 250 million people being affected by emergencies every year. Natural disasters such as earthquakes, floods and storms create considerable needs for emergency health care, while at the same time, often destroying vital health facilities as well. Man-made disasters such as road accidents and armed conflicts also generate substantial health care demands and the need for front-line treatment.

Blood transfusion is an essential component of emergency health care. Emergencies increase the demand for blood transfusion and make its delivery challenging and complex. Adequate supply of blood during emergencies requires a well-organized blood service, and this can only be ensured by engaging the entire community and a blood donor population committed to voluntary unpaid blood donation throughout the year.

Slogan: What can you do? Give blood. Give now. Give often

This year’s campaign will focus on blood donation in emergencies. In crisis or emergency situation, the natural human response is “What can I do? How can I help?”. Therefore, the slogan for the 2017 campaign is: What can you do?, with the secondary message: Give blood. Give now. Give often.

The campaign underlines the role every single person can play in helping others in emergency situations, by giving the valuable gift of blood. It also focuses on the fact that it is important to give blood regularly, so that the blood stock is sufficient before an emergency arises.

The objectives of this year’s campaign

services in their community by donating blood;

programmes with the capacity to respond promptly to the increase in blood demand during emergencies;

donation, in order to maintain adequate supplies and achieve a national self-sufficiency of blood;

and consensus on the principles of voluntary non-remunerated donation, while increasing blood safety and availability

Young Innovators, University of Nigeria, Nsukka in collaboration with Special Education Unit, Innovation Centre, Youth Friendly Resource Centre, African Youth Association of NGOs, Multi-Education Service Trust, Intellectual Property and Technology Transfer Office, Roar Nigeria Hub and LIFYEAD Africa is proud to host the 2017 Young Innovators International Conference. This conference will be the largest gathering of Youths, Inventors, Entrepreneurs, Innovators and Students Union Government across Africa, serving as a platform to support, unite and re-focus activities towards youth innovation, creativity, entrepreneurship and development of the African nations. You are by this invitation invited to stand out as one of the Guest/Delegate/Participant in the University of Nigeria, Nsukka.

Accommodation: Some decent and affordable hotels available in Nsukka will be communicated to participants in confirmation of their online registration. Certificate of Participation is #1000 (Optional) to be pay on arrival at the conference venue.

Young Innovators International Conference have some limited space available for interested students who wish to serve as Volunteers scheduled to hold on August 4- 5, 2017 at Princess Alexandra Auditorium, University of Nigeria, Nsukka. All shortlisted Volunteers will help the LOC to coordinate all activities in collaboration with the Volunteer Coordinator to usher participants/delegates, assist us with registration, serve as Protocol Officer/Usher during the workshop, serve in various parts of the workshop, help us during the refreshment, lunch and perform other crucial tasks which may be assigned by the Volunteer Coordinator. The success of the conference depends on the support of 10 – 20 volunteers. All interested volunteer MUST not be more than 30 years old by August, 2017, have excellence communication skills and must be available for the full day of the conference. Interested Volunteers (Protocol Officers and Ushers) can forward their details (Name, Phone Number, Email, Dept, Age) to younginnovators.unn@gmail.com  on or before July 30, 2017. As soon as the number of volunteers needed is completed, volunteer applications will close instantly.

Observe worldwide on 1 December since 1998, World AIDS Day (WAD) is the moment of the year where millions of people  come together across the globe to commemorate people who lost their lives to HIV, applaud progress made in responding to the epidemic and recommit to ending the epidemic.

Join us this World AIDS Day, 1st December 2015 and… Put A Ribbon On It

… as evidence of your solidarity to the fight against HIV and AIDS, and our recommitment to ending the epidemic as we have just done with polio in Nigeria.

Simply wear a red ribbon. There is nowhere the red ribbon cannot go! Get crafty with it – put it on landmarks, people, clothes, buildings, food.

If you have any special skills use them. You really aren’t dressed without a red ribbon!

By wearing the universal symbol of HIV awareness – the red ribbon – you are showing solidarity with over 3 million people living with HIV in Nigeria – and the 34 million world-wide, thus sharing in the vision of achieving ‘Zero new HIV infections. Zero discrimination. Zero AIDS-related deaths’

‘Getting to Zero’ is a must and this can only be possible with a renewed activism from all stakeholders. There must be a synergy among the government, civil society organizations and the private sector in bringing the epidemic to a halt. Getting an HIV test (accessing HCT) is imperative and our greatest arsenal in the fight against HIV and AIDS. It is a necessary first step to access prevention, care and treatment services including PMTCT.

Yes, in spite of the remarkable progress made so far, the challenge is still there – majority of those infected by HIV don’t even know – HIV thus, will continue to be invincible as long as many, especially the young people who are still largely unaware of their risks to HIV (vulnerable) continue to make HIV invisible by not knowing their HIV status. No one can win a war against an invisible enemy!

Accessing HCT is the only way one can be prompted to take measures to prevent being infected with HIV if one is not infected or access treatment and care if one is already infected, and by so doing helps to control the further spread HIV and reduce its complications. In addition, undergoing HCT helps break the culture of silence, fear and ignorance that drive stigma 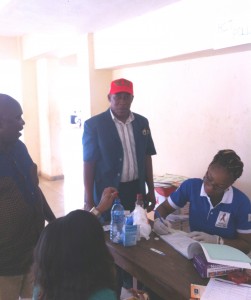 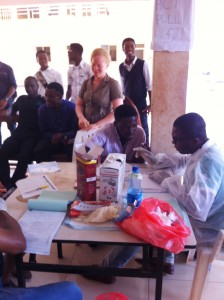 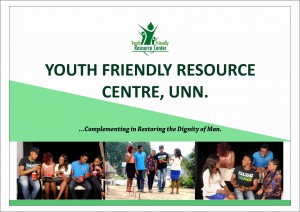 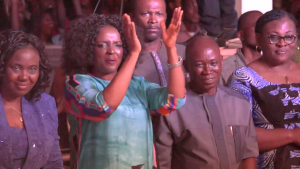